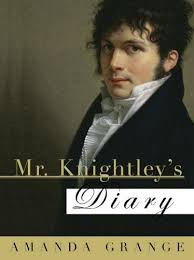 “I was up at daybreak, and oversaw the start of the clover-cutting before getting ready to go to Box Hill. The day was fine, and we had a good journey. Whether we were tired from yesterday’s enjoyments or languid because of the heat I do not know, but there was a lack of spirit in the party.” – “Mr. Knightley’s Diary”, Amanda Grange (AG).

“They had a very fine day for Box Hill; and all the other outward circumstances of arrangement, accommodation, and punctuality, were in favour of a pleasant party. (…) Nothing was wanting but to be happy when they got there. Seven miles were travelled in expectation of enjoyment, and every body had a burst of admiration on first arriving; but in the general amount of the day there was deficiency. There was a languor, a want of spirits, a want of union, which could not be got over. They separated too much into parties.” – “Emma”, Jane Austen (JA).

“We strolled about until it was time for our picnic. Then, indeed, there was more liveliness in the party, (...) for Churchill made Emma the object of his attentions. (..) Whatever it was, he did not behave like a gentleman.

Emma did not seem to notice anything amiss, and flirted with him in the most painful way; painful to me, as I am in love with her more every day. (…)

Her flirting grew worse. It was beyond anything I had seen, and I dreaded where Frank Churchill‟s influence would take her.” – AG

“At first it was downright dulness to Emma. She had never seen Frank Churchill so silent and stupid. (…) When they all sat down it was better; to her taste a great deal better, for Frank Churchill grew talkative and gay, making her his first object. (...) and Emma, glad to be enlivened, not sorry to be flattered, was gay and easy too, and gave him all the friendly encouragement, the admission to be gallant, (...) but which now, in her own estimation, meant nothing. (...) Not that Emma was gay and thoughtless from any real felicity; it was rather because she felt less happy than she had expected. She laughed because she was disappointed; and though she liked him for his attentions, and thought them all, whether in friendship, admiration, or playfulness, extremely judicious, they were not winning back her heart. She still intended him for her friend.” - JA

"Our companions are excessively stupid. What shall wedo to rouse them? Any nonsense will serve. They shall talk. Ladies and gentlemen, I am ordered by Miss Woodhouse (who, wherever she is, presides) to say, that she desires to know what you are all thinking of?" - JA

“Emma smiled at this mixture of flattery and silliness, instead of looking disgusted, as she should have done” - AG

Some laughed, and answered good-humouredly. Miss Bates said a great deal; Mrs. Elton swelled at the idea of Miss Woodhouse's presiding; Mr. Knightley's answer was the most distinct. "Is Miss Woodhouse sure that she would like to hear what we are all thinking of?" - JA

“I looked at her intently, knowing she would not like my thoughts.” - AG

"Oh! no, no"—cried Emma, laughing as carelessly as she could— "Upon no account in the world. It is the very last thing I would stand the brunt of just now. Let me hear any thing rather than what you are all thinking of. I will not say quite all. There are one or two,perhaps, (glancing at Mr. Weston and Harriet,) whose thoughts I might not be afraid of knowing." - JA

“Well might she say so. They never find fault with anything she does, but to have such uncritical friends is not good for anyone.” -  AG